The ancient church of Saint Leonard in Treponzio, probably edificated in 782 on another church, was a hospital that still preserves its medieval structure, the nave and the semicircular apse. At the end of the XII century it was rebuilt and enlarged.
Of particular interest is the little meadow placed in the south side of the church. From here we can admire the edificated structure in Guamo stone with the decorations of the parament in high and low rows, typical of the sacred architecture of Lucca.
The façade has a saddle roof structure and of great value are the portal and the correspondent archivolt. The artist, probably Giudetto, represents some aspects of human problems with few elements: the wheel of life, the opposites of human temperament (ferocity and intelligence), temptations (the siren) and so on. The use of white marble that creates a contrast with Guamo stone captures the attention of whoever contemplates the façade.
In the inner part of the archivolt there are other moral symbols hertitage of ancient wisdom: these symbols (the wheel of fortune, wind vanes and so on), represented by simple bas-relieves, describe an allegory of human life with its precariousness.
On the 18th of September of 1921 was consecrated the new Church of Saint Leonard, built next to the romanic one.

Inside the church we find the 14 paintings of the Via Crucis (XVIII century). 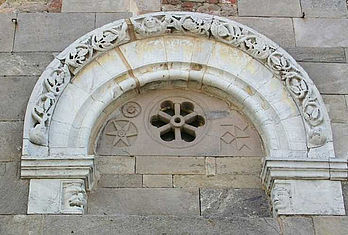 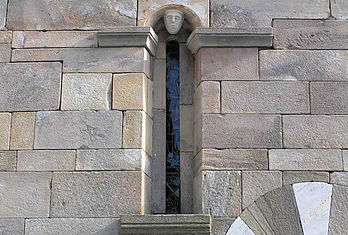