The WWF Oasis of Bottaccio, located in the municipality of Capannori, is a nature reserve that spreads out in the territory of the Rio Visona in Castelvecchio, one of the various streams running down Monti Pisani.
This nature reserve expands for about 20 hectares and it preserves, along with "Bosco di Tanali", one of the last woods that once surrounded the lake of Bientina.
The area, instituted as Nature Reserve of Local Interest (ANPIL: Area Protetta di Interesse Locale) by the municipality of Capannori, is crossed by the streams that run down the slopes of Monti Pisani creating marshes and swamps. The area has been modified by human works but it maintains most of its original features.
In 1993 it was instituted as nature reserve so to protect the landscape and the wildlife, and thus became one of the 130 WWF natural oasis of Italy. It can be visited. It was also expanded thanks to the interventions of the municipalities of Capannori and Bientina.
The name of the oasis, "Bottaccio", indicates the drainage areas that were totally embanked to collect water and sediments. Bottacci, in fact, are the artificial basins located in the area that collect the water running down Monti Pisani.

What does the landscape offer?
The landscape has different features and we can mention at least four kinds of territory: the wooden area, the meadows, the canebrakes and the "clears" or clearings that form a variegated mosaic.
The little wood is mainly constituted of farnias and black alders, along with minor elms, maples, elders and other local trees.
It is to mention the presence of the rare Arisarum proboscideum, endemic species of the italic peninsula with rhizomes very appreciate by the porcupines. The depressed area of the Bottaccio (in which grow the marsh cane and the samphire) and the meadows do not have a wildlife of great interest, but create the harmonic mix that is characteristic of this landscape.
There are many animals that populate the oasis: we can catch sight of boars, foxes, porcupines and rodents such as loirs, harvest mouses and dormouses. It is important the presence of amphibians like newts, efts, frogs and tree frogs, symbol of the oasis.
The opening season is from March to May, the best period for birdwatching: we can spot wild ducks, baldcoots, water hens and dabchicks.
The canebrakes shelter butterbumps and reed warblers, that also populate the adjacent canals. During the period of migration, grey and red herons and white storks are also visible. These species once populated the bogs next to the bottacci and their presence is a good sign of health of the territory.

The organization of the Oasis and the guided visits

In the WWF Oasis of Bottaccio visitors can find various paths, uplifted wooden bridges for the osservation of the swamps, two watching sheds next to the clearings for birdwatching, a rest area and a "Nature Route" with didactic panels to learn more about the wildlife of the area.
The guided visits begin with a historical and naturalistic presentation of the Oasis and continue with the Nature Route that runs into the wood of farnias and black alders. The path leads then to meadows, marshes and clearings, where it is possible to rest and practice birdwatching.
The Oasis organises activities of environmental studies for children and students. Both the lessons and the guided tours of the Oasis last about 2 hours. Pupils can be transported by bus. 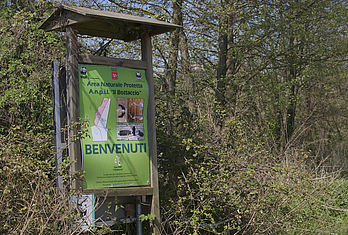 The Oasis of Bottaccio remains closed and is not visitable for long periods during the hunting season. in this period the oasis often gives wild animals the possibility of finding shelters.

For this reason, guided visits organized by expert staff are available from the first Sunday of February to the second Sunday of May. The visits begin at 10:30 and at 15:30. Group and school visits can be also organized on working days, under reservation.

The "Road of Oil and Wine"

The Life Route of Marlia