The present church has been modified several times and expanded with two different lateral naves.

The bell tower was modified in XVII and rebuilt in 1928.

San Lorenzo,deacon and martyr, died on 10 agosto 258. Lorenzo is shown when he is going to die or when he is wearing a bag with the Church treasure. Some scholars believe that Lorenzo died beheaded. 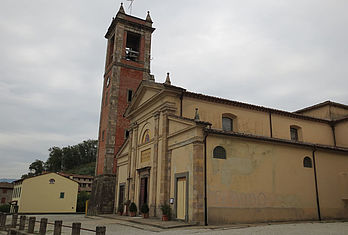