The compound of buildings is placed on an isolated slope of the village, reachable through the paths that descend Monti Pisani: the enclave hosts the church, in the middle, a paved courtyard, the bell tower, a row of cypresses on the left and the parsonage on the right.
News about the Church of Saint Bartholomew are found in the Esteem of the Church of Lucca, dated 1260, but the church was surely consecrated before, in the XI century. In 1526 it was attached to the convent of Saint Ponziano.
The church, in romanic style, has a nave and an apse. From 1309, as witnessed by the incision on the façade, the original building has been renewed and enlarged many times.
In 1980, theapse was restored: the unaesthetic saddle roof with pilaster and the wooden structure that covered it were eliminated. Today the apse, that preserves its definite medieval characteristics, is covered with local stone (Verrucano or Guamo stone) and it has a single-lancet window and a series of arches.
The façade with parastre was entirely restored with typical local materials, as witnessed by the stones decorated with interwined motifs and by the dentils and the side walls. The right one shows differences in thickness and is partially covered by the parsonage, while the left parament shows two single-lancet windows and a round arch window.
On the left of the church rises the imposing bell tower (dated 1333), with four single-lancet windows and a ghibelline crenellation. It was also used for defensive purposes.
Inside, the church was plastered and now has a beautiful polychromed coffered ceiling that dates back to 1638.

Inside the church we find important works of art, such as the oil painting "Madonna in trono e santi" (representing the Virgin on throne with Child, two angels and Saints Bartholomew, Apollonia, Lucy and John the Evangelist) dated 1478 and painted by Vincenzo di Antonio Frediani, famous artist of Lucca that lived at the end of the XV century. The painting is placed inside a monumental wooden aedicule surrounded by columns and ornated by a predella, a coping and a golden lunette. All this was painted and carved by Zacchia the Old in the first half of the XVI century and was restored and gilded in 1554.
Along with the paintings of Tiberio Franchi (first half of the XVII century) and the frescos on the apse of Pier Filippo Mannucci (1861), at the entrance we can admire the splendid stoup showing the Bonvisi's coat of arms made by Vincenzo Civitali (1589). On the right wall of the presbitery there is the marble aedicule filled by oil paintings of Saints, attributed to the Civitali school.

In the adjacent parish hall there is the gorgeous polychrome earthenware statue of Saint Bartholomew, dated 1400 and attributed to the school of Lucca. This statue was damaged and parts of the foot and of the legs are lost. 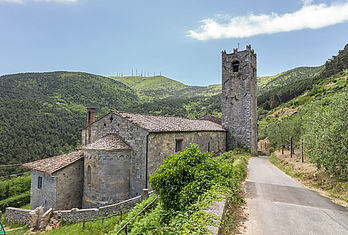