The church, located in a panoramic position, was part of the Plover of Segromigno, as witnessed by an Esteem of 1260. Made of Matraia stone, the church was built between the XII and the XIII centuries. It has a nave and a particular apse: the roof is covered with slate and a second one is sustained by columns.
The church has been restored many times and one of the most important restorations has to do with the construction of the porch and with the plasterwork of the interior.
The bell tower rises next to an arch as high as the façade. The superior part was rebuilt in 1843. The façade had a single-lancet window identical to the one of the church of Saint Andrew in Caprile, now replaced by a rose window.
In the XV century the Church of Saint Peter was annexed to the one of Saint Andrew in Caprile and it became a parish church only in the 1792, thanks to a donation made by the patron marquis Mazzarosa.
The Mazzarosas gave the church new furniture and obtained the right to choose the parson.
The church is placed in the proximity of three other romanic churches important for their history and for tourism: the parishes of Segromigno, Saint Quirico in Petroio and Saint Andrew in Caprile. Important works of consolidation were made on the retaining wall, but the building presents cracks and it is not open to worshippers and visitors for security reasons.

The furniture was taken and given to the Museum of Villa Guinigi. We have to mention the altar piece of Paolo Biancucci (XVII century, representing the Crucifix and the Saints) and an important seventeenth-century wooden structure in which stands out the work of Zacchia the Old that represents the Virgin between Saint Peter and Saint Andrew (1548).
There also is a prestigious copper cross that dates back to the XVI century.

Many pieces have been stolen by unknowns: the tabernacle, the stoup of holy water, the pipes of the organ and a column of the porch, along with some marble pieces of the major altar. 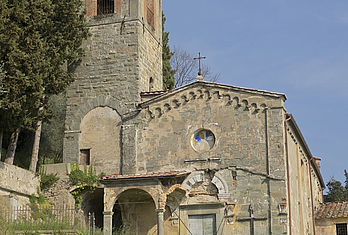