The original church was probably built in 919 by monks. There are no traces of the original structure, but part of a column.
At the beginning of year one thousand, the church was mentioned among the land revenue of the Abbey of Sesto. According to the Esteem of 1260 it came under the Parish of Compito.
The church and the bell tower has been restored many times. The most important dates back to the end of the XVIII century.
The actual bell tower, that replaced the one of 1577 (23 metres high), was built between 1867 and 1883, according to the project of Giuseppe Pardini. The last important work of restoration of the church dates back to 1929.
Originally there also was the Parish of San Colombano. It was attached to the one of Saint Andrew of Compito between the XIV and the XV centuries.
The little church belonged to the powerful abbey of Sesto, as witnessed by documents of the X century. In 1855 it passed to the salesian nuns and in the XIX century it was owned by the state.
Abandoned and restored many times during the centuries, the church became a school, then a storehouse, a dancing hall and a bar. In the present storehouse of the bar there is a gravestone that reminds us the restoration made by monsignor Giovan Antonio Raffaelli in 1770.
The Church of Saint Michael of Compito was once a place of worship, but at the present time it is property of a private.

In the church there is a recently restored organ made in 1741 by a certain Micheli, a villager of Vorno.
Among the furniture we highlight the presence of a fiftheenth-century painting of Domenico Francesco Corsi that represents the Virgin between Saint Andrew and Saint Luke, and of a painting of Benedetto Bramante that dates back to the end of the XVI century and represents Saint Andrew over an altar.
Of relevance are also two paintings of Pier Filippo Mannucci that date back to the beginnign of 1600 and seem to represent camellias and decorative flowers. That is important in order to define the date of introduction of the camellias in the territory of Lucca.

The four chapels dedicated to Saint Lucy, Saint Luigi, Saint Rocco and Rosario are also important to be mentioned. 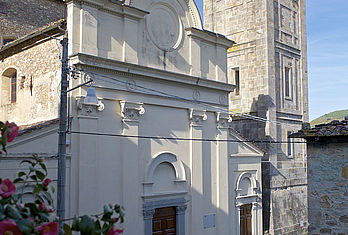