History and architecture
The present church of Coselli is dedicated to Saint Lucy. It has a nave and it was built on an ancient medieval chapel at the end of the XVIII century.
On the façade there are two pilasters, a tympanum and the main squared door. Of great artistic value is the mosaic of Saint Lucy.
The church has a bell tower that dates back to XIX century and another smaller one.
Originally, the old church was dedicated to Saint Paul and Saint Lucy came under the Parish of Vorno.
In 1387 appeared news about the presence of a monastery dedicated to Saint Paul and of a Spedale dedicate to the Holy Trinity.
The toponym of Coselli probably derives to the lombard name Causo.

Works of art
Inside the church there is a painting, dated 1600, that represents Saint Lucy.

Under the major altar there is the tomb of Saint Eugenio martyr, whose corspe was taken from the catacombs of Rome in the XIX century. 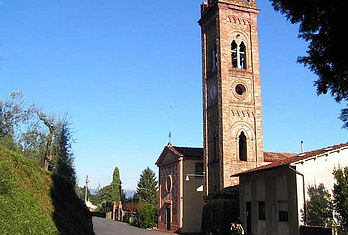