History and architecture
In the first half of the XII century, in Guamo, there had already been a church dedicated to Saint Michael.
From 1156 to 1400, a benedectine monastery (then used by the Domenican and the Capuchin order) was added to the church of Saint Michael.
In 1630 the monastery was used as a lazaret and in 1808 was definitively closed by a decree of Elisa Baciocchi.
Of the original buildings there are no traces. Some parts of the perimeter walls of the present parsonage fit with the ones of the ancient benedectine monastery. The only element of the structure with artistic value is the façade, that coincides with the original capitular hall. Twin columns, chapiters and arches in white marble and red bricks form an harmonic compound.
The present church has a cross-shaped layout and three aisles. The works of restoration ended in 1891.

Among the furniture we may mention the sixteenth-century wood painting of the Virgin on Throne and the painting of Saint Peter and Saint John the Baptist, dated 1618. 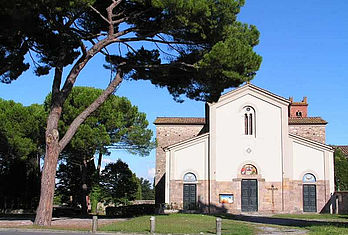