The original church came under the Plover of Segromigno.
The present church was probably built at the beginning of the XIII century and in 1260 it appeared in an Esteem. Made entirely of stone, the church has a nave and an apse.
On the façade there are typical romanic arches, the stone portal with a decorated arch and the lunette ornated with a fresco of 1735 (that represents the Virgin of the Rosary between Saint Peter and Saint Andrew).
The church was restored many times: in 1892 the footing of the presbitery was covered with marble, the chorus was enlarged and the major altar was moved to a different position.
In the inferior part of the bell tower is visible a big arch (closed after 1580) that allowed a longitudinal passage through the bell tower.

Inside the church we find two paintings of Pietro Nocchi: the first one dates back to 1809 (S.Cuore, donated by Cheli of Lencio court) while the second one dates back to 1816 (S.Andrea). There is also a stoup dated 1592 and an organ dated 1703 (built by Bartolomeo Stefanini).
The major altar dates back to 1769 and was built by Carlo Antonio Vagli.
It is said that the altar had been intended for the church of Camigliano but that it was considered too small for that church and therefore sold to Girolamo Angeli, parson of Saint Andrew. 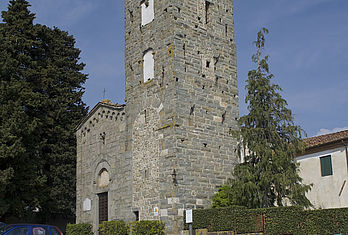