Athena is Capannori's archeological and etnographic Museum. It includes some sections dedicated to the explorer Carlo Piaggia and to the peasants community.

It is located inside a historical building of three floors in the centre of Capannori on the Francigena Route and it is a fidelity point for all pilgrims.

Athena's sections are divided as follows.

Exposition of the wooden building of Frizzone

It was found during on the construction site of the tollbooth of Capannori, and it shows no signs of wasting especially on its buried part.

After a restoration lasted nine years, from December 2016 it was transferred to Athena Museum to proceed with the wood drying in an acclimatised environment.

Farmers' Community of the plain by Ponte cultural association

There is an exposition of many agricultural tools from the past, pictures portraying farmers working on the fields and publications about corn and beans cultivation, in addition to other typical local products.

Latin epigraphy in the area of Capannori

The 'stele dei Laronii', found in 1954 in Castelvecchio di Compito, is one of the most important epigraphic documents ever found around Lucca.

The section has a total of five epigraphic findings, all funerary stones, whose carved words tell not only the story of people and families who lived in the plain of Lucca around the first century, but also give us insight about the everyday life in the Roman society of the time. But above all, those stones tell the private and even intimate lives of people who lived in the area around 2000 years ago like no other type of finding can.

Archeology of the Lands of Auser by Gac (Capannori's Archeological Group)

This section tells the story of Capannori. Among findings of major interest, collected over 30 years of excavations, there are also Roman and late republican findings in the Frizzone area, such as a glass cup, three glass balsa-mars, a cup of sigilled African soil and six bronze coins.

Other findings of the Roman age are also important, like those of via Martiri Lunatesi, among whom stands out an amphorae of "spello" type, an annular bronze element with longitudinal markings and a bronze key. There can be found also prehistorical items coming from various sites such as bronze age ones found in Palazzaccio's area.

It can be also found a temporary exposition of the land of Auser which is dedicated to archeological researches held in Frizzone during Capannori's autostradal hut excavations. It hosts typical Frizzone's findings of late republican age and, in particular, from I and II century BC, and among those there are two children burials, earthen wares of great prestige and a plastic that has the shape of a wooden building found during the excavations.

Sections dedicated to the Capannori's explorer Carlo Piaggia (1827-1882), born in Badia di Cantignano, that in the half of the nineteenth century explored various areas of the African continent, such as the Nile, Sudan, Ethiopia, Eritrea.

Capannori makes available to citizens, associations, public and private organizations the hall of Arcadia for exhibitions, events and initiatives with cultural purpose. 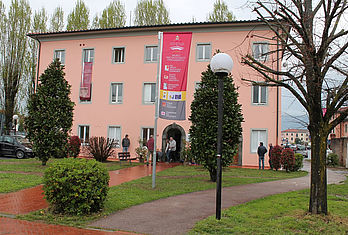 The southern variant of Francigena's route