History and architecture
The original building with nave (the architrave is still used to sustain the main entrance) was founded in 812 and replaced in the X century by a structure with three aisles. The parament and the decorations were renewed at the end of the XI century.
It has three aisles, pilasters, an apse, a façade with a low slope and a squared parament. The architectonic frameworks form the geometrical structure of the church, surmounted by decorated arches. The ceramic bowls that ornated the arches are lost. The shelves that sustain the arches are decorated with alternated medieval elements, gadroons and dentils in classic style. The church was restored in the XVI century: the façade was modified so to have an oratory with windows next to the door and an outer porch. The original inner trusses were replaced by vaults.
The bell tower is made of squared stones in the inferior part and of bricks in the superior one.

Inside the church we find a fourteenth-century painting representing the Virgin with Child among the Saints Jacopo and Christopher. Critics are divided about the attribution of the painting: some think that it was a Biduino's work, others attribute it to Michelangelo di Pietro from Lucca. 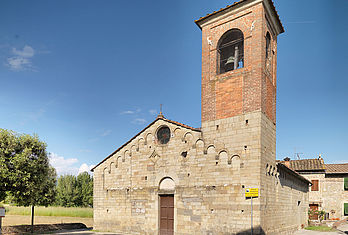