The territory of Capannori is characterized by a huge water patrimony, a fundamental resource that has given the possibility of creating important itineraries.

Route 1: Aqueduct of Lorenzo Nottolini
The first water route considers the aqueduct of Lorenzo Nottolini, built in the first half of 1800 and ended in 1851. This work, constituted by 484 arches made of bricks and Guamo stone, runs for 4200 metres through the countryside of Capannori from the village of Guamo, located at the foot of Monti Pisani, to the city of Lucca. Following the path that flanks the aqueduct, visitors can admire the little temple of Guamo that, along with that of San Concordio, constitute a water tank.

Route 2: Project Water Route
The project "Water Route" was created in collaboration with the Regional Government of Tuscany in order to preserve water and promote the best natural springs of the territory, giving tourists and locals the possibility of visiting them.
The project involves 15 springs spread throughout the territory:

Along the route, special panels inform the public about the quality of each spring, providing a list of the specific chemical and mineral properties, as well as a brief story of the fount and complete map of the route.

The territory of Capannori is characterized by the presence of springs that give us high quality water. The main ones are:

Chiattino - Guamo - This spring, often used by locals, is located next to the old road of Guamo, in the area of San Quirico and of the homonymous stream. The cast-iron fountain, placed under the arches of the aqueduct, was built in parallelepiped shape and ornated with a coat of arms. The basement is made of stone. On the opposite side of the road rises the ancient Church of Saint Quirico in Casale, that dates back to the Middle Ages. The fountain has a plaque that shows a date: 1869.

Al Fattore - Colognora di Compito - This spring is located in Via di Colognora, in the proximity of the crossing that leads to Tassignano. It is placed on the left side of the road, into the stone wall of a villa.

Capo di Vico - Sant'Andrea di Compito - The spring called Capo di Vico is located on the road that leads to Monte Serra, in the proximity of the little medieval bridge that crosses the stream Visona. It is placed under the street level and has three sprinkler heads: two are parallel to the street while the third is perpendicular to it. A plaque between the sprinkler heads shows the date of 1891. An old washtub rises next to the fountains. The stream runs nearby and on the opposite side of there is the locality of Capo di Vico.

In the proximity of the spring has been recently built a camelietum.

Piturnella - Massa Macinaia - A washtub was built next to this spring.

S. Pierino o S. Pietro - Sant'Andrea di Compito - This spring is placed on the street that from San Giusto di Compito leads to Sant'Andrea di Compito. It is reachable only on foot. The fountain is famous for the quality of its water and it is often used by the local population. It is located on the left side of the valley of the stream San Giusto and has three sprinkler heads. There is a washtub next to it and it was feeded by a branch of the stream that, today, appears to be deviated.

It has two sprinkler heads and a structure in parallelepiped shape made of concrete. The fountain was built in 1900. Two stone pools rise next to the spring, on the left.

It has two sprinkler heads and a structure in parallelepiped shape made of concrete. The fountain was built in 1900. Two stone pools rise next to the spring, on the left.

Ravano - Castelvecchio di Compito - This spring is along the street that leads to Castelvecchio Alto and it is surrounded by a vast meadow and spruce pines. The fountain takes its name from the old owners of the place. They owned the homonymous villa (with the ancient Abbey of Sesto) and other lands in the territory of Castelvecchio.

Originally, the spring was located on the opposite side of the road where now rises the tank in which water arrives.The structure is made of bricks.

La Pollina - Ruota - This spring is placed near the village of Ruota, next to the road that leads to Monte Serra. It is located against the mountain and over the structure that hosts a little statue representing the Madonna of Lourdes.

Few metres away from the spring, on the same side of the road, stands a washtub.

The spring of Vorno between Via del Cimitero e Via di Valle - This fountain is one of the so-called "wall basins". The two pools are located next to the pilasters of the main gate of Villa Guerrieri Brancoli. They are characterized by a stone basement placed on a brick flooring.

The spring of Vorno (Via di Valle) - This fountain is made of cast-iron and has only one sprinkler head. This spring is located far from villages (locality Cima Valle) and dates back to 1800. It was the only supply of water and was used both for domestic and rural purposes. In the following years (1900-1901), the spring was deviated and canalized so to reach Conte Gatti and Ponte dei Galli.

The Spring of Vorno (Via Comunale per Vorno) - This fountain was built at the beginning of the XX century and had an imposing structure characterized by double pools, a vertical wall decorated with a lesene, a cornice with dentils and a half-moon tympanum enframed by two statues representing lions. Unfortunately, in 1965, the fountain was modified so to allow the construction of a school. The present fountain shows many modifications and it was renewed again in 2001. by the C.R of Vorno and by the marble quarries, in memory of the Frediani brothers. The statues that surmounts the fountain represent lions with powerful muscles and thick manes that fight and face the sprinkler heads of the fountain. 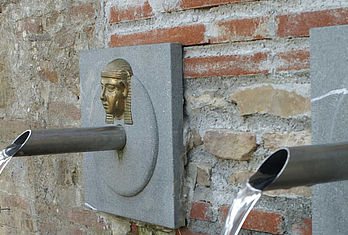 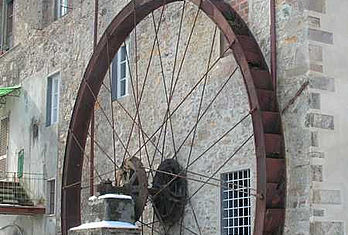 The "Road of Oil and Wine"

The Life Route of Marlia