The Women's International Tour of Tuscany

The Women's International Tour of Tuscany is coming back this September for a weekend of road cycling and events dedicated to the unforgettable Michela Fanini, the champion that at only 21 had already won an Italian championship, a world championship bronze, a Giro d'Italia, and 4 Tour de France stages.

Just like the previous editions, it will be a three day show with a tough competition to crown the new 'Grand Duchess' of Tuscany.

Last year, the competion attracted 21 teams (13 from abroad), had 160 athletes from 25 different countries, and it was a veritable record for a women's cycling events. 232 km in one single breath.

It will be a weekend filled with emotions, events and great cycling, hoping to beat the 2016 record attendance.

There will be 232 km to cover, starting in Campi Bisenzio with a time trial. The race will then continue with a challenging Segromigno in Piano-Porcari-Segromigno in Piano and, for its last stage, the insidious Lucca-Capannori. Brunello Fanini, like every past edition, is in charge of the whole organisation. 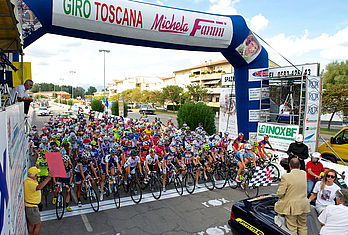