History and architecture
The history of this church is deeply connected to the presence of a local abbey (the monastery of Saint Salvatore), from which comes the name of the locality. The church dates back to the XVIII century.
In the XVIII century the façade was replaced with a new one, to which has been attached a porch.
The building maintains traces of the original structure, dated IX-X centuries (Benedettini's period), and evidences of the XII century (Camaldolesi's period).
Inside we find:

Private roman baths were probably located next to an ancient villa, in the area where the abbey was subsequently built. After the excavations of 1965-66, some rests were found under the presbitery of the church: circular walls of the roman baths interrupted by a transversal wall that divides the space in two baths, very interesting rests of the four-colours mosaic flooring (without Christian symbols but with the typical features of the classic mosaics of the roman baths) and stones, bricks, pilasters, lead and ceramic tubes of undisputed romanic craftmanship.
In the necropolis were found 13 tombs and in one of these there were a preserved skeleton. These tombs are very simple: narrow in the final part and wide in the superior one, carved in long and thin stone slabs without decorations or inscriptions.
Two stone caskets, containing a wood goblet and an heart that shrinked after the ossigene contact, were also found in the necropolis. These are relics and their importance is highlighted by a seal and an inscription of the benedectine abbot who, during the construction the first abbey in the VII-VIII century, put the relics in the central part of the main altar.
There is a debate about the identification of the human rests found in the tombs and about the relics but, at the moment, is impossible to give exact answers.

Others important evidences were found in the apse: in the inferior part there is an early Middle Ages parament and in the superior one we can admire a series of archs sustained by pilasters.
In 1896 a new tower bell was built, and even the villagers contributed to the construction, along with the engineer Giovannetti. In 1899 the works were finished by the rich Pierotti, that added the still working clock to the tower bell.
Near the church we find the ancient ""Palace of One Hundred Windows"" where lived the Benedectine order (IX century) and the Camaldolesi one (XII century).

Works of art
Inside the church we find the frescos already mentioned, a Triptych of Agostino Marti, dated 1500, and the wood crucifix of Pierluigi Romani (1968).

Of great value is also the organ (1876) played by Carlo Giorgi from Lucca, Barsanti from Pisa and the famous Giacomo Puccini, only a fledgeling musician at the time. 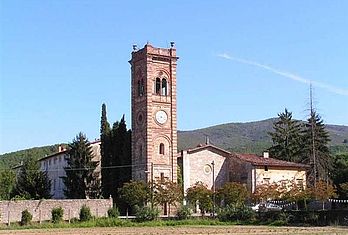