Two magnificent wings of cypresses, about one kilometre long, announce the theatrical façade of Villa Torrigiani, one of the finest examples of baroque architecture in Tuscany.

The Villa and the park date back to the beginning of the sixteenth century and belonged to the Buonvisi family. They bought the estate from the Berti family in 1561. It was the scenary of the romantic relationship between marquise Lucrezia, wife of Lelio Buonvisi, and her lover, Arnolfini, who was probably captured in front of the gates of Camigliano after being accused of the murder of marquess Lelio. Lucrezia was then confined for the rest of her life in a convent, and according to the legend her ghost haunts her beloved garden.

In the first half of the seventeenth century, this villa in Camigliano was bought by marquess Nicolao Santini, ambassador of the Republic of Lucca at the court of Louis XIV of France, who decided to transform the villa in a majestic estate, with a garden of flowered parterres, and huge pools where the façade could reflect, just like the one created for the palace of Versailles by the famous architect Le Notre.
He created the Garden - Theatre of Flora with caves and water features still functioning inside the Cave of the Winds: an imposing example of artificial cave ornated with mosaics of stones and surrounded by niches with statues of the winds, and little fountains in the basement. The cave is surmounted by a dome from which drops of water sprinkle constantly, simulating rainfall.

The perfectly preserved frescos by Pietro Scorzini represent 'The Seasons' in the rooms, mythological scenes in the halls, and Emperor Aurelian in the main hall: all these scenes incorporate views of the garden. It is worth noting that all these frescos enframe and complement the original furniture still present in the villa. Today the villa is still inhabited by the family descendants of marquess Nicolao. His last heir, Vittoria Santini, married marquess Pietro Guadagni Torrigiani in 1816. Their busts are visible on the façade and in the nearby chapel, where marquess Carlo Luca and his daughter,marquise Simonetta Torrigiani, are also buried. Simonetta married Don Carlo Colonna, Prince of Stigliano in 1937 and from the couple descend the present lineage.

The imposing main façade has a triumphal aspect and it is characterized by an impressive sense of movement due to the presence of materials of different consistence and colour.
The main divisions on the façade are marked by balustrades with statues. The park is another element of the villa and it is characterized by a bursting sumptuousness. In the nineteenth century, the introduction of plants from all over the world gave to the frontal and to the back area a more romantic aspect.

The sixteenth century aspect of the estate can be recreated through documents and iconographical sources in which the palace, with its central loggia, is represented surmounted by a double structure, a sloping roof-terrace enclosed by the araldic symbol of the Buonvisi star, also present on their other villas. 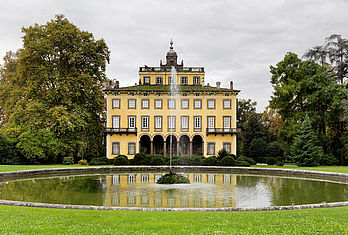 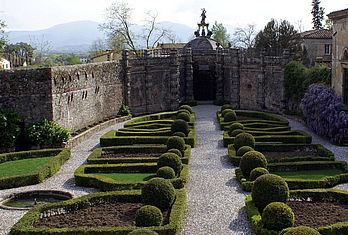 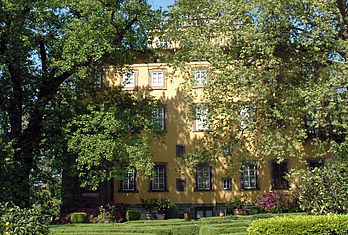 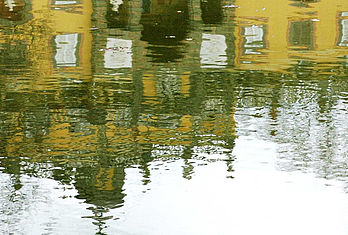 Both the park and the interior of the building can be visited. The visit includes an accompanied tour of the frescoed halls.

Open every day from 18 March to 5 November.

In other periods of the year a visit must always be reserved beforehand.