Part of "Sposarsi in villa"

Villa Bruguier is located in Camigliano and is dated XIX century.

The palace and the others buildings are enclosed in the vast park of the original villa of the Guinigi family. The villa and the park were both restored in 1821, after the remise of their other villa in San Colombano to the Archiepiscopal Canteen.

The three-floor palace is long and sormounted by the protruding construction supported by a white murble colonnade placed in front of the façade. An imposing terrace occupies the entire lenght of the arcaded loggia. That was necessary, at the age, because it offered shelter to the coaches. Inside the villa we find a large hall with columnes that leads to the inner staircase, the central space around which every room of the palace finds its geometrical place. Among the others historical buildings in the secular park, we find also the lemon-house, edificated in the XVIII century. It was built in order to shelter the lemon trees, that in summer time ornated the front meadows, during the winter period.

The lemon-house has mantained its architectural features after the restauration. It creates a suggestive and intimate atmosphere. The vast park is constitued by meadows scented by secular fragrances: cedars of Lebanon, conifers, horse chestnuts, legaestroenies. The ambient is brightened up by fountains and jet fountains. 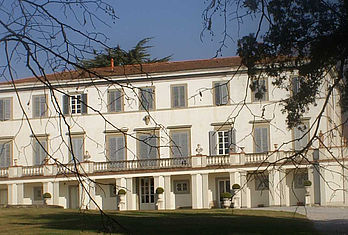 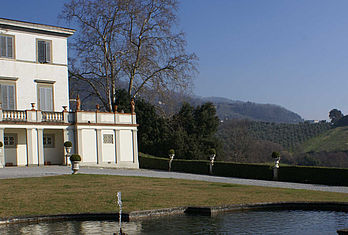 Via Sant'Andrea in Caprile 27 - Camigliano (Capannori).

The villa is part of "Sposarsi in villa".