Villa and park can be visited

Villa Mansi is in Segromigno in Monte and it dates back to the sixteenth century. Among the villas of Lucca, it is surely one of the most representative of the culture and society of the ancient Aristocratic Republic.

In the sixteenth century, Villa Mansi belonged to Nicolao Benedetti, as proven by a notarial act of 1599. His heirs sold it to Bartolomeo of the so-known Cenami family. The notary registered that for 656 golden scudi he bought 'an estate with various fields and meadows, with fruit trees surrounding the penstocks and the padronal palace, a stable, a well, an oven and a stoned wash-house, among others buildings, located in the municipality of Segromigno in Monte, in the area called Piaggia'.

The estate belonged to the Cenami family until 1675, year in which it was acquired for 1600 scudi by Raffaello Mansi , well-known in Europe for he traded in silk. He wanted the villa to be the favourite summer residence for himself and the generations to come. In fact, what he purchased was registered as 'a beautiful estate with fields, encircled by stone walls and adorned by kitchen gardens, fruit trees, gardensand groves, with streams, a vast fish-ponds and lakes enriched by statues, and meadows, paths and avenues, with a gorgeous padronal house and a court-yard sorrounded by pergolas of vine and by others wonderful houses for servants and gardeners, a coach-house, stables for the horses, refectories, halls, the Tower of the Clock, courts and court-yards and so on'.

Villa Mansi is famous for the elegance of its architecture and for the beauty of its gardens. The original building, from the second half of the sixteenth century, was greatly restored between 1634-1635 by the architect Muzio Oddi from Urbino. The Mansi family ordered a restoration of the façade, realised by architect Giusti from Lucca, and a modification of the garden based upon the project of Filippo Juvarra, whose work concerned the penstock, the idraulic system, and the tripartition of the garden. Juvarra partitioned the east garden and the area of the stables so to create the vast meadow in front of the villa and a new garden in the west area. The results were therefore four main garden sectors, autonomous and alternately reversed in a trapezium shape.

Among the various frescos that adorned the villa, those of the central hall are surely the most interesting. They were painted by Stefano Tofanelli, a neoclassical artist admired by Elisa Baciocchi, princess of Lucca and sister of Napoleon Bonaparte. These works are two vast lateral paintings that recall Apollo's deeds (the judgement of Mida and the death of Marsia), and a fresco on the ceiling that represents 'The Triumph of the God of Sun'.

Villa Mansi gave hospitality to sovereigns and ambassadors from all over Europe, invited by the Republic of Lucca for a pleasant stay. 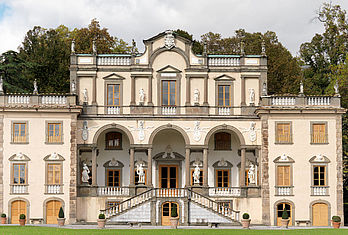 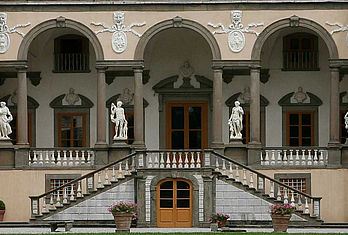