The Villa Reale of Marlia is one of the major points of touristic relevance in Tuscany.

The Clock House was built by the Orsetti family between the end of the 17th century and the beginning of the 18th century to accommodate the stables, the kitchens and other service areas. The name derives from the elevated position of the six-hour clock, typical of many villas in Tuscany at the time.

Comparing it with the historic plans, it seems that the building did not undergo any particular changes during Elisa Baciocchi’s rule, while architectural work was overseen by Giuseppe Marchelli. A new structure was added, however, which encircled the pre-existing building.

The restoration of the Clock House, was commissioned by the current owners in 2016. The wide building features a portico and an elevated loggia with columns above it. The main Villa and the Clock House are connected by an underground tunnel, still in existence today.

The first references that involve this villa are dated 1517, when the Buonvisi family bought it from the Avvocati family. In 1651 it passed to Oliviero and Lelio Orsetti, who restored the garden and built the Palace of the Clock.

The monumental structure of Villa Reale is extremely interesting because it contains stratified evidences of two important architectural periods. An area of the park, in fact, still preserves the original style of the eighteenth century, with its geometrically arranged evergreens and the greenery theatre dated 1652. Of the same period is the theatre of water, located behind the palace. The villa, on the other hand, is a neoclassical building that dates back to the period of the napoleonic principality of Elisa Baciocchi. It is an imposing and sober construction on three levels. The main entrance is characterized by three arches surmounted by a balustrade with columns. The back façade has a porch. The inner parts are marked by a strict coherence between architecture and decorations. It is to mention the famous fresco of Stefano Tofanelli, 'The Dance of the Hours', on the ceiling of the dancing hall.
Villa Reale was the estate of noble families and important patrons of art.

The sister of Napoleone, Elisa Baciocchi, sovereign of Lucca and, lately, of all Tuscany, created this gorgeous complex and ordered a radical restoration of the two ancient penstocks: the one of Villa Orsetti and the one of Villa del Vescovo, that together formed a complex among the most admired of Europe, and also the favourite estate of the sovereign. Elisa Baciocchi had the ancient Palace and the main loggias that constitute the entrance, restored in moder style, but the marvellous gardens of the eighteenth century with the Greenery Theatre and the 'Camellias Route'are still the original ones.

After the fall of Napoleon, this villa belonged to the Dukes of Parma and then to the Grand Dukes of Tuscany. After the unification of Italy, the villa became property of King Victor Emmanuel II, that gave it to Prince Charles, brother of the last King of the Two Sicilies, destituted after the marriage with Penelope Smith, an English commoner. The romantic but unhappy couple passed the rest of their life in this villa and both were buried in the chapel in the park. Their son was known as the 'Crazy Prince,, because of his religious fervour and his eccentric behaviour. After his death, in 1918, Villa Reale was sold in order to pay his debts: the furniture was sold and many trees of the park were cut down for the wood. Count and Countess Pecci-Blunt, parents of the present owners, fortunately bought the estate before the complete demolition of the park.

The new owners ordered the restoration of the garden to Jacques Greber, a famous French architect. He created groves, streams and a lake that today form a romantic counterpart to the series of gardens in classic Italian style of the Orsetti period. Some of the important guests of the past were the violinist Paganini, members of European royal families, and the American painter John Singer Sargent, who pianted some water-colours while at the villa. The Pecci-Blunt family follows this tradition of generous hospitality towards personalities of the world of culture and politics. 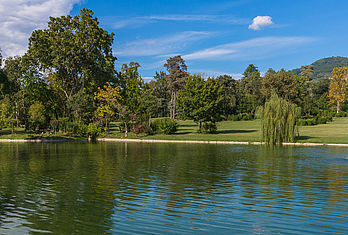 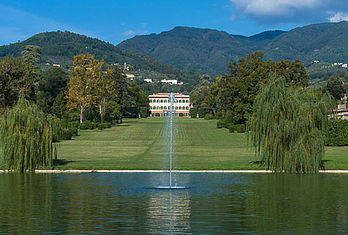 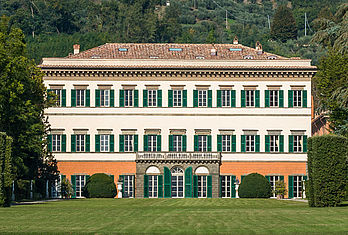 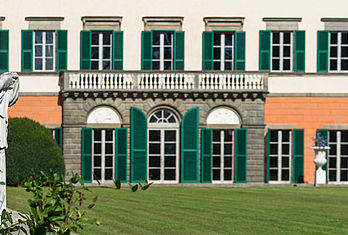 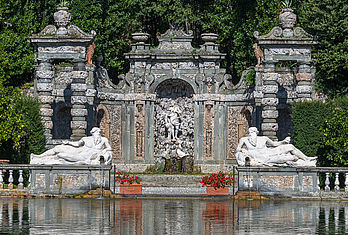 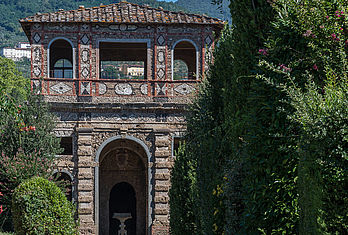 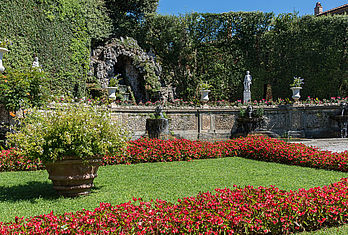 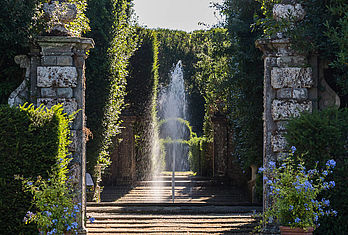 Last entrance 4.30 pm. Dogs on leash are welcome in the park.

You can BUY the ticket here: https://villarealedimarlia.it/en/visit/time-and-prices/