Part of "Sposarsi in villa". Avalaible for events, conferences, meetings.

This villa, owned by the Lazzareschi family, was one of the property of the Pagnini family, a lineage already well-known in the XIV century for its professional figures, for about five centuries.

The huge house of Camigliano was edificated by Ottaviano and Decio, sons of Agnello, for a large amount of money. In 1619 Ottaviano for 1400 scudi bought 'the estate with both the ancient and the new houses, with two attics and an oven, with fields and a brick kiln, with trees and vines and chestnut, pear and apple trees [..], located in the municipality of Camigliano, in a locality called Belvedere or Al Poggio, next to the east properties of the heirs of Giorgio', as attested by the notary registers of the time. This estate, including the furniture, remains in the possession of the heirs of Ottaviano, passing through Alessandro, Angela and the others generations that followed until the XIX century.

The villa is situated on a hill and it also has farm annexes. The main avenue is flanked by trees and leads to an imposing eigtheenth-century gate in juvarrian style. Two little twin towes of the lemon trees house, with round arch openings, rise on each side of the gate.

Belonging to the Lazzareschi family since 1982, the villa has been completely restored, and the garden has been modified according to the nineteenth-century project. At the moment, the villa is the administrative centre of a touristic business that hosts its guests in rustics recently renewed with traditional materials and tecniques. 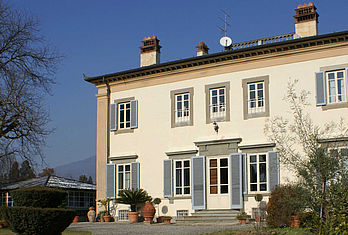 The villa is part of"Sposarsi in villa".