Attested as a pieve since 867, the parish church of Vorno is dedicated to Saint Peter and it probably was among the 28 parishes of Lucca during the age of the bishop Frediano.
According to a document from the year 1000, the churches of Cantignano, Coselli, Guamo and Verciano were grouped under this parish, while in the Esteem of 1260 only two churches were in the same dependent position.

There is historical evidence of the presence of an ancient religious building, probably Lombard in origin. The structure of the original twelfth-century building was totally upgraded and modified. The only rests are an erratic chapiter attributed to the school of Beduino and some columns of the centrale nave, with their pillars.

In 1793, the pieve was enlarged by Giovan Battista Petri: the central part of the porch and the façade in front of the porch itself were destroyed, and the bell tower was restored.

The bell tower located on the right side of the church, is in Guamo stone, a typical material from nearby Monti Pisani. It has a squared layout, four arched windows, mullioned windows, and elegant chapiters supporting the bell cell. On the basament there is a gravestone that states the date of edification.

We have to mention the stone baptesimal font with embrasure, neoclassical work probably attributed to Lorenzo Nottolini, and the toup of the late Middle Ages, "twin" of the other one located in the cathedral of Saint Martino. This one was built with Carrara marble and presents an elegance that characterized that age ready to a big stilistic change. 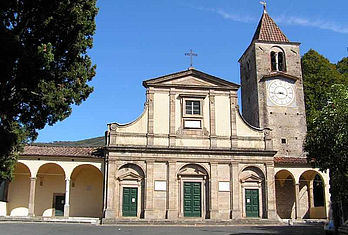