History and Architecture
The original pieve (Plebs S.Stephani de Villa, 983) was located in a locality called "Villa" or "Villora", in a strategic position of the Empire, between Monte Pisano, Orentano, Porcari and Capannori, but today is situated in the area of S.Ginese. The church rised in this flat area and it was a reference point for the near villas, along with the others of Paganico and Massa Macinaia. In 1077 it was renamed as Plebs S.Iohannis Baptiste de Computo.
The church was built in the second half of the 11th century, then completely restored after it collapsed on the 10th of August 1728. On the 15th of May 1791, the parish was consecrated by the archibishop Filippo Sardi.
The building was expanded in 1875 and in 1909, the last work of restoration.
The bell tower, in front of the façade, was built and enlarged at the beginning of the 17th century.
The parish church has three aisles, a gable, a pilaster and neoclassical sides.

Under the major altar are preserved the human rests of Saint Anastasio, recognized as authentic through a bull of 1645 written by Mons. Alessandro Cenami. 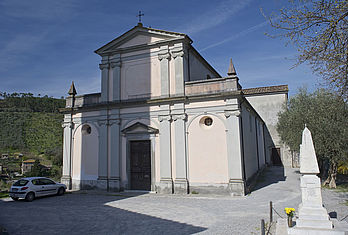