History and Architecture
Already known in the 8th century, it was recognized as a parish in 812. Before 768, the church was devoted to Saint Martin, and later it was dedicated to Saint Frediano. It seems, in fact, that the parish of Lunata was one of the first churches built by the bishop Frediano, that loved this country and lived there during his old age.

The parish of Lunata controlled the churches of Saint Andrew in Tempagnano, Saint Lorence in Picciorana,  Saint Michael in Antraccoli and Saint Quirico in Capannori. In Lunata there was also the church of the Saints Mattew and Pellegrino, along with the pilgrim's hospital, kept by Priors and parish priests and then suppressed in 1776. The church stands along the Francigena route, the main route that led pilgrims to Rome, capital of Christianity.

The bell tower (12th-13th century) is an evidence of the importance of the parish of Lunata. The basement is made of serena stone, while the superior parte is made of terracotta decorated with single-lancet windows, mullioned windows and mullioned windows with three lights, along with a ghibelline crenellation. As a curiosity: during the operations of restoration, in 1896, iron rings were found in the inferior parte of the bell tower. These were maybe used by fishermans to bind the boats. As a matter of fact, Lunata is located in an area that was partially submerged by bogs and marshes created by the Serchio river (Auser) before the drainage that diverted the water into another riverbed. The name "Lunata" itself , probably, indicated a curved area, "lunata" (in moon shape), due to presence of a branch of the Auser river. The presence of the iron rings, therefore, indicates that the bell tower or its basement is very antique.

Inside the church, on the right, we find a baptesimal font font dated 1481. The stoup, (15th century), belonged to the school of Matteo Civitali, who had a workshop in Lunata. Another work of Civitali's school is the tabernacle for oil paintings of Saints.
On the left side we find an hexagonal font dated 1400 that was not a baptesimal font but a well, from which villagers took holy water.
On the right side of the altar there are two paintings of Francesco Vanni (1602-1604): the Mistic Wedding of Saint Catherine and, on the superior lunette, the Holy among the Angels. On the left is painted Saint Michael Archangel.
The altar on the right transept is dedicated to the Vergin. Here we find a Saint Sebastian and a Saint Anthony from Padova. Into the niche there is the ancient wooden sculpture of the Vergin on the throne with the Child (end of the XIII century) known as Madonna del "Metrito", not in good conditions of preservation. This statue has been object of venerations and many believers came from other dioceses to thank God.
On the altar of the left transept we find an oil painting of Alessandro Ardenti (1566) that represents Saint John the Baptist and the Saints Girolamo and Jacopo.
The decoration and the fresco on the apse and on the dome are from the last century and were painted by Michele Marcucci.
In the parish church we also find the organ of Evaristo Santarlasci (1892). The sound box, totally painted, is dated 1785.

Among the precious ornaments here collected, it is to mention a brass processional cross (1430) on which are represented the Virgin, Saint John and Saint Frediano. 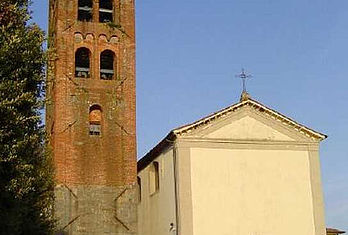