The first documentations about the parish of Saint Lorence or parish of Segromigno dates back to 816, when this parish was under the authority of the parish of Lunata. Only in the 872 it was declared parish itself and became independent.

In the 13th century the parish of Saint Lawrence included the churches of Gragnano, Camigliano, Sant'Andrea in Caprile, San Pietro a Marcigliano, San Quirico a Petrojo, Valgiano, and San Colombano.
In the territory of the parish there were also some hospitals: Sant'Antonio (Camigliano), San Concordio (Rimortoli, S.Colombano), San Bartolomeo (Monte Gromigno) and San Bartolomeo (Segromigno).

The pieve has three aisles and a latin cross-shaped layout. Inside the church we can admire a roman column that reminds the cultural tradition of the area (according to a local legend, the column was stolen from the amphitheater of Lucca). The present structure of the pieve is from th 12th century, when it was erected with squared sandstone. It is a local interpretation of the romanesque style of Pisa, particularly apparent in the first row of arches of the façade. The sides without arches and the apse were built at a later time.

The original apse was replaced in 1738 by a quadrangular structure. Other modifications were made in the nineteenth century, especially in the interior where, nonetheless, the style of the original structure is still visible. The structures on the south area of the courtyard between the church and the parsonage were removed in recen times.

Among the works of art we can mention the marble tabernacle attributed from the critics to Baccio da Montelupo (1519), the frescoes of Luigi Ademollo, the seventeen century marble pulpit, and a piece of the ancient ambo now bricked up at the entrance of the parsonage from the thirteenth century. 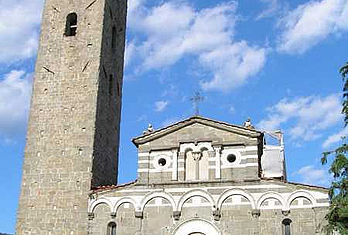 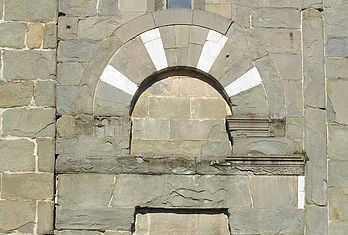