After the repeated and bloody battles of the 14th century, the area in which the church rises was fortified for defensive purpose and came to known as Fortress of Capannori. It was probably in that same period that the road passing through the village began to gain more importance than the older Francigena route.

At the beginning of the 16th century, the church obtained the autorization of installing a baptesimal font without being a parish church yet.

The present building is formed by a compound of structures modified during a period of thirteen centuries, from the Middle Ages to present time. First rebuilt in 970, after the demolition of 940, the church was restored many times in the 12th century. In 1642 two lateral aisles were added and in 1800 the apse and the transept were built according to the project of D.Martini and with the decorations of M. Marcucci.

What impresses the visitors most is the effect created by the three-colour alternation of the Guamo stone, used for the church, and the Matraia stone, used for the bell tower along with bricks.
The church has a cross-shaped layout, a big transept and an apse of the same size.

The façade and the imposing bell tower show a pure romantic style and are evidences of the Middle Ages period in which the building were built. The decorations of the façade were made with the typical style of Pisa and Lucca and of great value are the two erratic bas-relieves: one on the door post, representing the three natural kingdoms (the animal, the vegetable and the mineral one), and the other one, acephalous, probably representing a monk. The sixteenth-century sides and the seventeenth-century tympanum are harmonically mixed with the elements already mentioned of the façade.

The bell tower rises next to the church, on its right side. It has a squared basement and it is about 33 metres in height. It has a ghibelline crenellation and four bells, two small and two big.

The interior is quite modern and the present aspect is due to the architect Domenico Martini, that realized it in the 19th century. It is to mention the presence of the frescos by Michele Marcucci.

The pieve hosts a fifteen-century stoup, a sixteenth-century baptesimal font, and a painting by Nicolao Landucci, a eighteenth-century artist of Lucca. This painting was ordered by the parishioner after the cholera epidemy of 1855.

Moreover, some relics (among which there are the ones of Saint Quirico and Saint Giulitta) are preserved in a little shrine located in the left side of the transept.

Silverware and paraments of different ages, from the 16th century to the 20th century, are also preserved in the church. 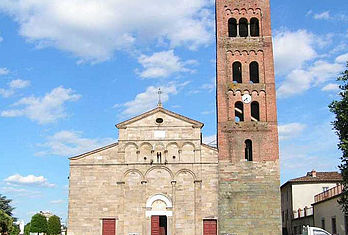