The Tower of Sant'Andrea di Compito

The watching tower of Sant'Andrea of Compito is located in the area called "San Pietro a Forcone", also known as "Vico Crociccole", name that highlights the central position of this area. The tower represents a unique kind of structure in the territory of Capannori and it was one of the watching towers of the Republic of Lucca.  Used for defensive purposes, it was built in the 12-12-3th centuries, on a strategic and panoramic position between Lucca and Pisa, next to an important road of medieval pilgrimage (Via San Colombano).
It had the original function of signalling the presence of possible enemies, as witnessed by the brazier located on the top of the tower and used in case of imminent dangers. Afterward, the tower became a bell tower (it rises next to the church of Saint Lucy).
The tower is made of local stone and has a quadrangular structure. It is 4,20 metres wide and 18 metres high. The iron grid placed over the entrance contained the heads of executed criminals, so to discourage villagers from committing crimes. It was a kind of "cautionary tale".
During a period of more than eight centuries, the tower has not been damaged neither by lightnings, earthquakes, atmospherics nor by battles and attacks. It remains well preserved even if its primary function changed and was forgetten and neglected.

In June 2007 important works of restoration have been made: the consolidation of the walls, the substitution of the roof, the replacement of the main door and of the floor. 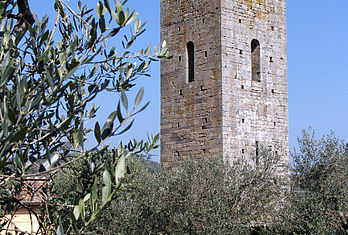 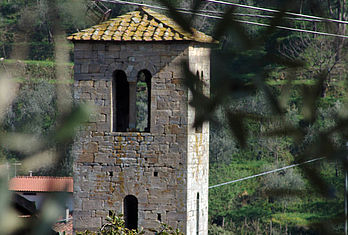 The archeology in Capannori

The watching tower of Sant'Andrea of Compito